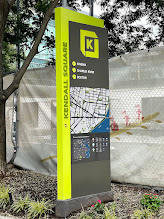 Back in May, Relay Therapeutics took 41,000 square feet at BioMed's 60 Hampshire Street building in Kendall Square for $110 per square foot.   Epigenetic cancer drugmaker Epizyme has now joined Relay in Kendall Square's over $100 club with a two year extension of its existing lease at Alexandria's 400 Technology Square building around the corner.

Epizyme, whose stock has been falling and whose CEO was recently replaced, signed on for just two more years, committing to its 43,000 square feet footprint through November 30, 2024.  Epizyme has been in the building since its redevelopment in 2012 and when rents were about half of what they are now.

Epizyme renewed its original lease in 2017 at $66 per square foot, which will have risen to $84.41 by the end of its term in 2022 with escalators.  Therefore, the new deal will require it to pay 30% more upon commencement compared to its existing lease.   Other tenants in the building include Novartis, Arkuda Therapeutics, and Casma Therapeutics.