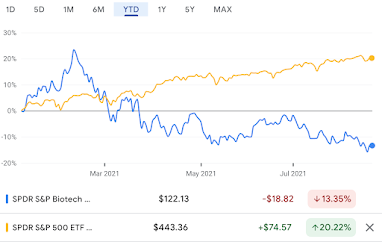 Monthly life sciences funding levels have fallen from a torrid $4 billion in January and February to $3 billion last month, a level likely to repeat in August.  While interest and enthusiasm in biotech remains high, investment in the industry is going through a correction, with returns on the XBI ETF now trailing the broader S&P 500 by 34 points in 2021.

For the last few years Biotech has outperformed the broader market.  But with this year’s correction, the five year returns on XBI are now practically equally to the S&P 500.

While stock market returns have come back down to earth this year, there is no loss of faith in the long-term promise of the industry.  Fund sizes keep getting larger, with Bain Capital recently announcing its newest life sciences fund will put nearly $2 billion of capital to work.  And the industry continues to account for over a third of non-SPAC, non-ETF IPOs.  Moreover, while total venture funding has fallen since the beginning of the year, large deals are still occurring, with four U.S. rounds this month topping $200 million, including Sonoma Bio’s $265 million Series C and XtaiPI’s $400 million Series C.

Some of the ceiling on funding isn’t just related to the correction, but the limitations placed by ultimately being dependent on insurers, Medicaid, and Medicare for payment.  This is why the industry needs to continue to expand beyond therapeutics.  While Zymergen’s recent challenges were a setback here, Elon Musk’s Neuralink plus Ag Bio developers PivotBio, Appel Sciences, and Sound Agriculture combined have raised over $900 million this quarter, or nearly 20% of all U.S. life sciences funding.  With interest in CRISPR for Agriculture also growing, synthetic and ag bio are poised to push the industry beyond medicinal applications and will likely play an increasingly important role in the industry’s next phase of growth.