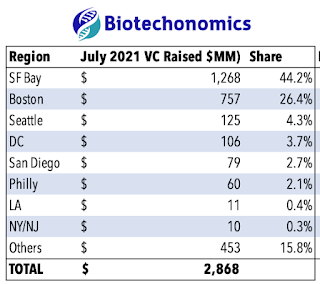 The Biotech XBI ETF is now trailing the Year-to-Date returns on the S&P 500 by over 30 points, so it's not surprising that life sciences fundraising has slowed from its torrid pace earlier this year.  After raising nearly $4 billion a month in January and February, the industry raised just under $3 billion in July.  It's fair to say euphoria has slowed to maybe just strong enthusiasm.

The biggest deals in the month came out of the Bay Area, with Berkeley-based AgTech startup Pivot Bio raising over $400 million, and Elon Musk's Fremont-based Neuralink pulling in $205 million.  Because month-to-month fluctuations are common, I wouldn't read too much into San Diego, New York and LA's low numbers for the month.  I'll have a YTD update and a new video on regional trends out soon.