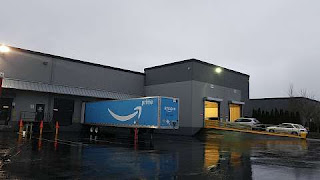 Oncology biologics developer Seagen is taking all 258,000 square feet of a new project in an industrial park 30 miles north of Seattle in Everett, WA.  The initial base rent of $15.50 per square foot might seem extremely low, but the company has a history of moving lab workers into industrial/flex space, as it has done at its Bothell, WA headquarters about 15 miles south of the new space.  Through a combination of its out-of-pocket costs and allowances, the landlord is allocating $156 per square foot to improvements from which Seagen can draw a TIA (tenant improvement allowance) if those funds aren't spent.

Moving into an industrial park next to an Amazon distribution center, Seagen is willing to locate employees in a neighborhood designed for tractor trailers, not people.  Therefore, this should not be seen as a reflection of the true market for office/lab space around Seattle.  Sequencing manufacturer Nanostring Technologies, for example, is paying current rates over $50 per square foot for its headquarters at BioMed Realty's Vue Research Center in South Lake Union.