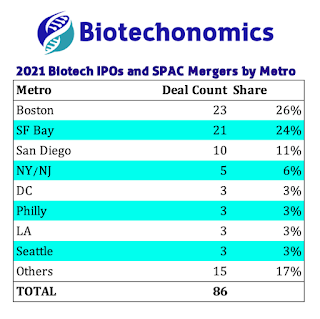 Much as has been the case with VC funding, the top four life sciences markets have accounted for 67% of the industry’s IPOs and SPAC mergers this year, with Boston holding a small lead over the Bay Area.  In total, 86 life sciences companies have completed IPOs or gone public by merging with SPACs.

The year started with one of the largest IPOs in industry history for a preclinical company when Seattle’s Sana Biotech went public at a $7 billion valuation in an offering that raised $600 million.  Such a high valuation for a preclinical company was seen as evidence of an overheated market for biotech stocks.  However, since its early February arrival to the public markets, Sana has lost 1/3rd of its value, while the broader biotech XBI index has fallen about 25%.

In addition to Sana, many of this year’s larger IPOs have lost value. Emeryville’s Zymergen went public at a $3 billion market cap but has given back nearly 2/3rds of its value after announcing it wouldn’t see revenue for at least a year and a half.  Dallas-based Instill Bio went public at a similar valuation and has given back 1/3rd of that value.   San Diego-based Singular Genomics nearly reached a $3 billion valuation but has given back 1/2 of its value since a June peak.  UK-based Centessa, which keeps a US HQ in Boston, has lost ¼ from its June peak.

It’s been a big year for SPAC mergers, with San Francisco’s 23andMe leading the way.  23andMe announced it would go public via SPAC right around the time of the Sana IPO.  Since then its lost just under half its value, and now holds a $3.7 billion market cap.  Other large SPACs have included San Francisco’s Nuvation Bio, Redwood City’s Bolt Biotherapeutics, and Nautilus Bio of San Carlos.

With the XBI Biotech ETF trailing the broader S&P by 30 points, it’s been correction year for biotech stocks, an impact felt strongly in many of the larger offerings.  However, the FDA is on pace to match last year’s near record 53 approvals, and CAR-T and immuno-oncology continue to show strength here, an important factor in lab leasing due to these technologies creating outsized demand for space.  While valuations for some major offerings have dropped, the pace of offerings hasn’t, as the industry’s fundamentals haven’t worsened even if some investor enthusiasm has.